Abyss has been added to the bill for Not Dead Yet fest 2013. We're not sure of the details, but we'll amend the post as they become apparent.

**OCTOBER 7th Edit: the weekend schedule is posted here: Not Dead Yet 2013 line up, and it looks like you'll have to get up early to catch us play. We're not really into foreplay and we don't snuggle, so be diligent if you want to catch our set. 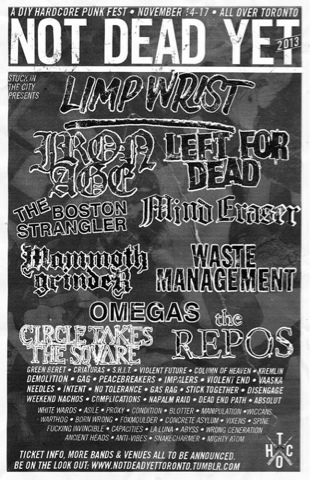 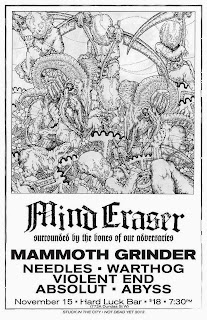 In other news, we're ironing out the details for a small show in January at a DIY venue. Details will be posted soon.  We're hoping to be a little more active with regards to playing live next year (I think we've played 2 shows total th
is year, 3 after NDY, and 2 of those 3 were fests...), this will hopefully include some sort of small tour, as well as some local shows. The past year has been plagued with conflicting work/band schedules, jam room evictions, other non-related personal stresses that have been fairly distracting.  The consensus among us at this point in time is to focus on gigs and recording in the coming months.