Toronto NO Thaw Festival May 3rd 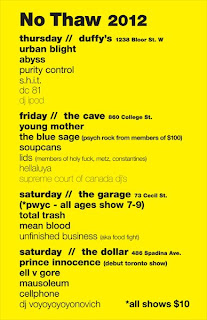 Tomorrow is the opening day of the 2nd annual Toronto (NO) Thaw festival - a three day festival that showcases a variety of different local bands, that might not ordinarily play together, and puts them on one bill - an assertive attempt at breaking up the homogeneity that can be Toronto music scene.
Abyss will be on around 11:30pm. There are 5 bands on this bill, but most, to my knowledge, have extremely short sets (ours included).  Also, this is slighted to have a large turnout, so it is suggested that you arrive sooner than later if you wish to savor our Obscene Requiem.

In other news, we are working towards booking a Montreal gig in July of 2012. We will keep you posted.
Posted by Abyss at 8:29 AM